During the 2012 London Olympics, did you notice the Olympics’ portrayal of women beach volleyball players? Apparently there was a controversy over photographs from their games — and the objectification of women that goes on.

Notice how many of the photos do not portray the women’s faces nor their abilities (through an action shot). Instead, they’re focused on certain parts of the body — mainly their chest and butts. 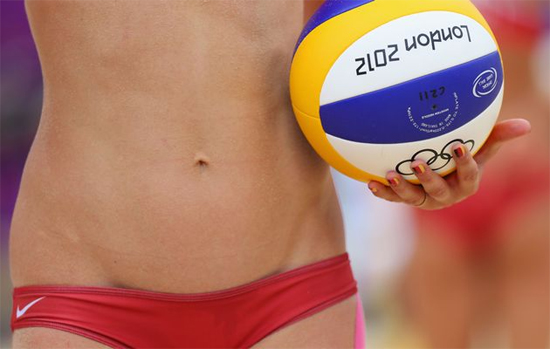 The pictures seem odd, uncomfortable, and even disturbing. The lack of identity in these photos seem unusual — we’re not used to seeing men’s body parts without their faces (except for maybe male swimmers). The intention of the photographers who published women’s volleyball pictures may have been benign; they were most likely just photographing what they thought was interesting and what would sell. But in the process, women’s bodies were objectified, faces were cropped off, and their athletic abilities (which are usually perceived to be markers of masculinity) were disregarded.

Women’s beach volleyball athletes are also Olympians. And we need to start treating them like it.

One thought on “Olympics Beach Volleyball: Bodies and Bikinis”