There has been a recent flurry of press surrounding Oberlin’s “hate-related incidents.” NYTimes writes:

The incidents included slurs written on Black History Month posters, drawings of swastikas and the message “Whites Only” scrawled above a water fountain. After midnight on Sunday, someone reported seeing a person dressed in a white robe and hood near the Afrikan Heritage House.

The school has subsequently cancelled classes to convene a “day of solidarity” and held a discussion reflecting on these experiences.

The media highlights the liberal and progressive nature of Oberlin — stating that it was one of the first to admit blacks and women. Its implications? It couldn’t possibly have been white Oberlin students who committed these acts. Even the administration is eager to note that this could be “the work of a very small number of cowardly people” and are looking into whether the perpetrators were from off campus.

I am not asserting that the acts were committed by Oberlin students — but I wouldn’t have been surprised if it had been and frankly, it doesn’t matter. It doesn’t invalidate the appalling level of ignorance and racial tension that exist in our society. There have been an alarming number of little red flags that have been catching my eye on college campuses all over the country. Perhaps Oberlin saw and ignored similar little red flags. But it’s not just in Oberlin — my university (or yours) could be the next to plaster major newspaper headlines with race-related hate crimes.

“Race-blind” at Brown University
Brown University, which is regarded as a “hippie” Ivy League, is also ranked as one of the most open-minded universities in the country. In December of last year, the Brown Daily Herald conducted a student poll, largely dealing with administrative issues — including affirmative action and race-based faculty hiring.

The result? Majority support race-blind faculty hires, and most students opposed to use of race in admissions. Many of those who opposed any race-based admission process either argued the post-racial society argument (“race no longer serves as a detriment because they have grown up in class next to minority students”) or a blatant cry for white victimization (race-based admission “discriminates against people of other races (read: whites) that are disadvantaged just as much”).

This sentiment has been heavily echoed by my white friends at this university. Racism is no longer an issue. Talking about race makes racism worse. We need to be color-blind and not consider racial issues. This  silence will only create larger problems — perhaps even culminating into hate crimes derived from this insensitivity and ignorance.

#RacistRager at Duke University
On February 1, Duke’s Kappa Sigma fraternity held a Asian-themed party titled “AsiaPrime.” The following email was sent out to the members to announce the party:

We are proud to announce the return to Kappa Sigma Asia Prime, this friday! We look forward to having Mi, Yu, You, and Yo Friends over for some Sake.

– The Brothers of Kappa Sigma

After retaliation against the racist email, Kappa Sigma renamed the party “International Relations” and went ahead with their racist rager. Yellowface, coolie hats, sumo wrestlers, kimonos, chopsticks — the party had it all.

The Asian American students at Duke launched an active protest against this party (including a mass flyering of these photos all over campus) not only sparked a discussion but received some retaliation of its own from fellow Duke students.

This lash of anger is often a familiar reaction from those that I (as an Asian American woman) talk to. Some don’t quite understand what “racism” means in the 21st century — it doesn’t just mean lynching, KKK, and massacres of Native Americans. The new racism is more evolved, more parasitic; it’s these microagreessions, it’s having the privilege to not have to think about racial issues in this country, then being appalled at the retaliation of an Asian American organization because Asians are supposed to be quiet, content, and by god, they’re a “model minority,” so what do they have to complain about, right? 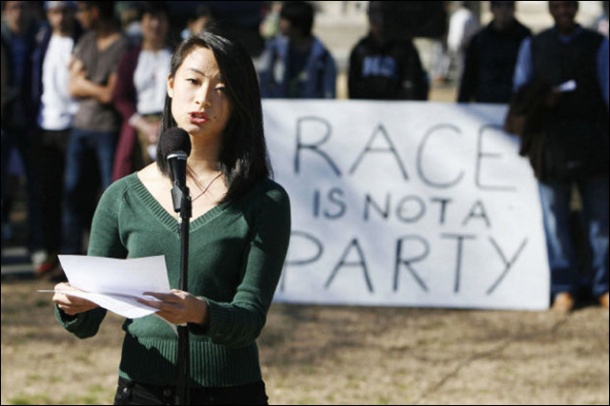 Hate Messages at UCLA
The next step from the well-intentioned acts of ignorance at Duke would be the racist slurs that plastered the UCLA campus last winter. Following their infamous Asians in the Library incident, UCLA also found themselves in another race-related incident. Signs were vandalized, stating that Asian women were “Honkie white*-boy worshipping Whores” and “White-Boy Worshipping Sluts.” Earlier in the year, there had been racist slur against Latino students as well: “You rude ignorant spic c*nts”, “dirty Meximelt b*tches.”

Meanwhile, back at Oberlin:

Today, one of my classmates told everyone in the classroom that the anger felt by marginalized communities about attacks on them was “tantamount to hate speech” and that they were “no better than the KKK”. He later went on to say that safe spaces (created BY marginalized communities FOR marginalized communities) were “disgusting” and should be considered dangerous and divisive. The only safe space he said he can understand are women-only hours at the gym because “men and women are physically different”. He also said that the idea of include any amount of cultural diversity-related topics in natural science and math classes would “delegitimize” the educational institution of Oberlin.

Another student said that it was the responsibility of People of Color to overcome racism by “proving the racists wrong.” He suggested doing this by “bucking up” and ignoring acts of violence, like how “Jackie Robinson ignored all the hate crimes done to him”.

It’s time to step up and speak up. We need to step outside of our safe spaces and make ourselves vulnerable. No, it’s not our job to educate others about racism. But we cannot merely add to the brewing racial tensions in this country by ignoring it once more. It’s exhausting. It might rip you into pieces. But it’ll make you feel human because proving to racism that you’re not belittled or diminished by your race — that’s the best way to fight racism.

2 thoughts on “Racism: It’s Not Just In Oberlin”